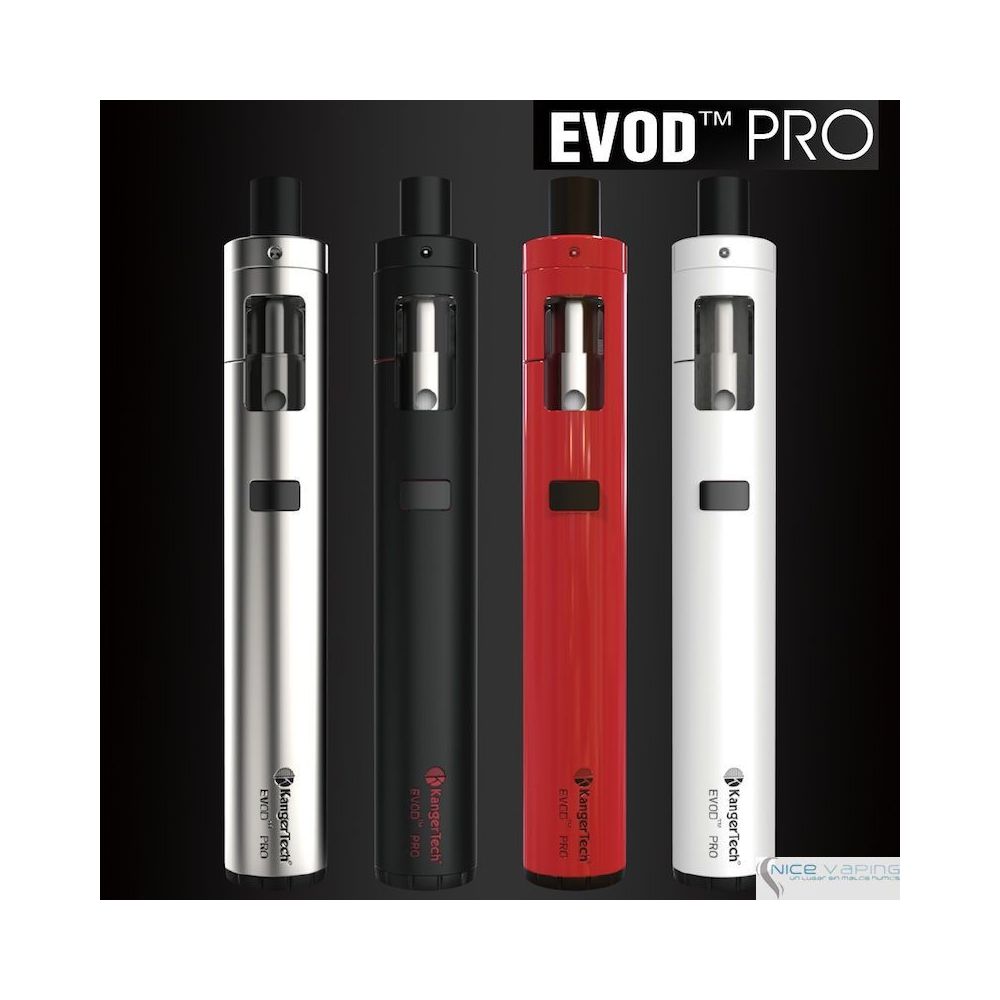 Kanger is set to roll out its second all-in-one device called the EVOD PRO. Unlike the Kanger NEBOX which is a box mod with a built-in tank, the EVOD PRO is an eGo-style vaporizer that incorporates a battery chamber and e-liquid delivery system into one sleek pen-shaped device.

Following the success of the TOP EVOD, this updated modern evolution of the EVOD promises to deliver an even more user-friendly, versatile, and satisfying experience for novice vapers.

The Kanger EVOD PRO features single-button operation, top-fill leakproof tank, and replaceable battery all at a very affordable price point – making it the perfect entry level device for vapers who are looking to try open systems.

The Kanger EVOD PRO resembles the original EVOD with a sleek, solid barrel featuring a prominent recessed fire button. But instead of separate components, the battery and tank sections form one seamless body made of 100% stainless steel.

Kanger EVOD PRO starter kits are sold in four colors: black, white, red, and stainless steel. Whichever version you choose, the drip tip and fire button will always be black. There is no display screen so you won't be able to view voltage, wattage or atomizer resistance.

The slim drip tip seen in many EVOD tanks has been replaced in the EVOD PRO with a short insulated broadcap designed to keep hot vapor away from your lips while drawing huge clouds into your mouth.

Instead of the small round button that you've seen in all versions of the EVOD, the fire switch of the EVOD PRO is now rectangular in shape so it's easier to access and click.

Pen-shaped vaporizers like the EVOD are typically built with internal lithium batteries. The Kanger EVOD PRO is the first eGo-style all-in-one device that uses an external 18650 battery.

Mods with internal batteries are still popular because they're more user-friendly. No need to purchase extra batteries or chargers. Just plug the device into a USB power source when the power drops and you can vape again. The downside is that you cannot replace the battery when it reaches the end of its life. When the internal battery dies, you have to replace the entire kit.

The tank section is integrated into the EVOD PRO body. You can access it from the top with a removable cap that allows you to easily refill the glass liquid reservoir. With a tank-in-mod design, the EVOD PRO has eliminated the common problem of loose, rusty, and worn out connecting threads.

The glass window on the EVOD PRO is not as small as the old EVOD tanks so it's easier to monitor liquid consumption. The top part of the EVOD PRO has a wide vertical clear glass that almost runs from cap to fire button, allowing you to see how much juice you have left. With stainless steel reinforcement, the glass is protected even if your device gets knocked around.

Inside the tank section of the EVOD PRO is a removable CLOCC – short for child lock organic cotton coil. You'll be able to choose from two variations, one of them is a 0.15Ω Ni-200 coil for temperature control vaping, and the other is a 0.5Ω SS316 coil rated for 15W to 60W.

Advanced mods usually feature some kind of airflow control valve so you can adjust the amount of air intake for a tighter or looser draw. Since the EVOD PRO is specifically designed for novice and casual users, the air hole under the drip tip is fixed for mouth-to-lung (MTL) vaping that mimics taking a puff from a regular cigarette.

The TOP EVOD and the EVOD PRO are both patterned after the original eGo pen-style vaporizer. They even come in the same colors: stainless steel, red, white, and matte black. But their similarities stop there.

Unlike the TOP EVOD which has a built-in 650mAh lithium cell, the EVOD PRO is powered by a replaceable 18650 battery. This allows you to experiment with different brands and specs of 18650s as well as extend the life of your device.

The TOP EVOD vaporizer is paired with a miniature model of the popular TOPTANK which utilizes 1.5Ω VOCC-T coils from Kanger and can only store 1.7ml of juice. The tank of the new EVOD PRO is not removable. It is part of the device as an integrated component capable of handling Kanger's new line of CLOCC atomizers and storing up to 4ml of e-liquid.

Like the old EVOD, the Kanger TOP EVOD battery is charged through the 510 connection on top. Because of this configuration, you cannot charge and use the battery at the same time. You need to unscrew the tank from the battery to be able to connect the EVOD to the 510 charger that comes with the kit. The EVOD PRO is more user-friendly because you can install a fully powered cell while your drained battery is charging independently on an external unit. There's also a micro USB port on the side for on-the-go charging and passthrough vaping.

Designed for mouth-to-lung hitters, the EVOD PRO is an incredible all-in-one device that is sure to become another massive hit among beginner and intermediate vapers.

Warning: Exercise extreme caution when working with Li-ion (Lithium-ion), LiPo (Lithium-ion Polymer) and any rechargeable cells, as they are very sensitive to charging characteristics and may explode or burn if mishandled. Make sure you have enough knowledge of Li-Ion (Lithium-ion), LiPo (Lithium-ion Polymer) and any rechargeable cells in charging, discharging, assembly and storage before use. Always charge on a fire-proof surface. Never leave charging batteries unattended. Do not use any rechargeable battery as well as any battery charger if any visible damage is present, as well as if the cell or charger has been stressed through mishandling, accidental or otherwise, even if damage may not be visible. Always store and transport rechargeable cells in a safe, non-conductive container in a controlled environment. Dispose of all battery cells and chargers in accordance to local laws and mandates.

Since the EVOD PRO does not have a display screen, make sure that you use an Ohms Law calculator before experimenting with a new coil. Sub-ohm atomizers will only work on mechanical mods or devices that can handle sub-ohm resistances of 0.5Ω or lower.

Do not use Ni200 (Nickel) and Ti (Titanium) coils with non-temperature control devices/mods.